We decided now that we built a much bigger coop last year, that we could part with this one. It was an insulated one with electric hook up that hubby built a couple of years ago, and it sold about the minute I put it on the Marketplace. It went to some people who were very happy to replace their patched together non-winterized coop. Nice to know it will have a nice life with another family producing food for themselves.

Next on the list were 2 tractors to sell. This one is in non-working condition, but that didn’t stop someone from buying it! People who know what they are doing, think nothing of a non-working tractor, other than, “I’ll get this running, no problem”. This tractor was of great use to us about 10 years ago, but after that we had little use for it, since we got a newer one that performed more of what we needed. This too, went quickly on the Marketplace, so quickly that I had 20 messages in my inbox within an hour! Tractors don’t stay with you forever, they keep getting new lives as they move on to someone else’s pasture. 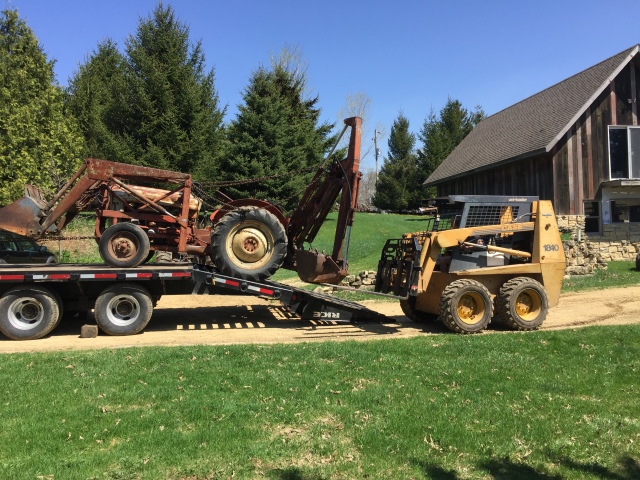 This old blue Ford actually runs great and hasn’t sold yet. It’s an awesome little tractor and when we were first living here I logged a lot of hours mowing with it. This one will sell soon, I am sure, but it will be a little sad seeing it go, we really like this one, but don’t have use for it now. Again, old tractors get new lives. 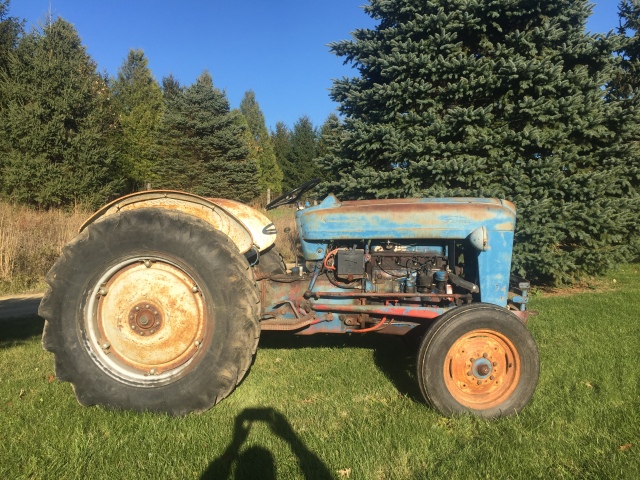 We have a big event coming up. A family wedding! We will have people here for a brunch afterwards, and suddenly all the things we so easily “didn’t see” are staring at us! How did this deck get so bad?! Good thing events every few years make us clean up our act.

I truly had no idea how gratifying power washing things is, I couldn’t stop! The deck is looking much better! It’s a large deck and it took about a day and half to clean, but wow, what a difference it makes!

This is my new sourdough starter. I am excited about it, as I have failed it before. How nice would it be if didn’t have to use yeast in my breads some day, just the sourdough starter! Well, if all goes well, this new young starter hopefully someday, years from now, will be my old starter from 2018!

The wonderful world of discarded starter! I’m learning to manage my starter with out it multiplying me right out of my house. The waffles and the rye sourdough English muffins went great. I take half of the starter first and make products like these, then I take the rest of the starter and feed it flour to keep it happy till next time. Hubby was pretty happy about the prospect of breakfast sandwiches on English muffins! 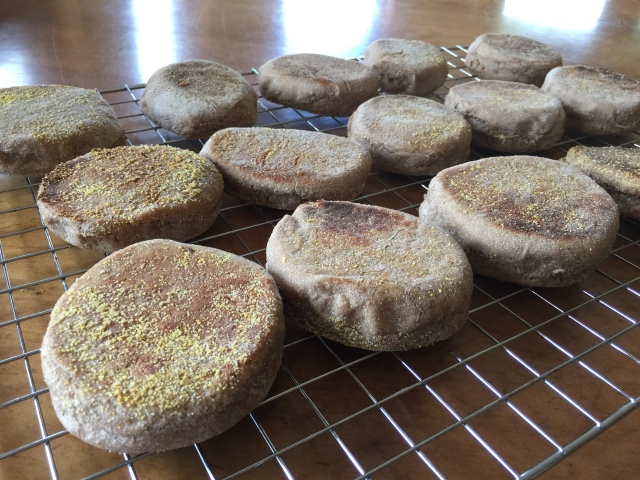 These new young Spring forages are: garlic mustard, pheasant back mushrooms, ramps and dandelions. All were sauteed and then cooked into a scrambled egg breakfast. Although Spring is just getting started, it’s been a delicious season so far! 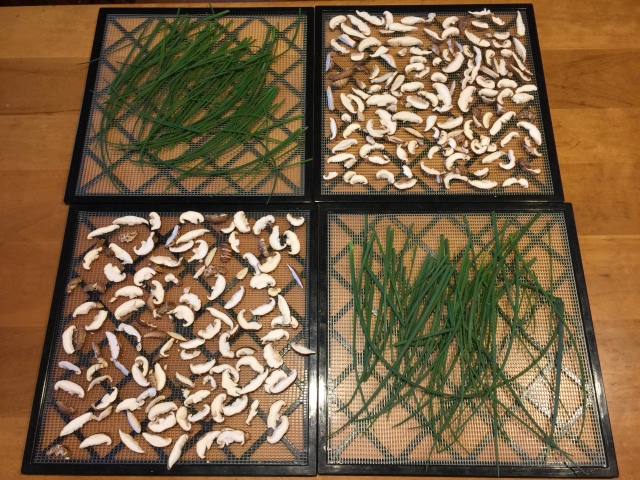 These will be the beginning of this year’s supply of mushrooms and chives. I always thought dried chives had no flavor. Usually, I cook with the fresh ones, and when it is getting toward the end of their run I take the rest and dry them, yielding very little flavor. This year I cut fresh early chives and they have a great flavor dried and will have even more flavor when hydrated in a dish.

These logs we just finished inoculating for next year’s logs. We tried three strains of shiitakes this year, not just one. Will be interesting to see if the varied strains extend the season on the early and late side.

These are very happy cattle, while it was just another day for them it was a big deal, to me, (but not to most farmers)! These guys were on hay in the paddock area while hubby was out of town for a week. They ate double the hay as usual, not sure if Spring weather instigates that or it’s our pregnant Mama’s eating more, but they were out, and literally licking the bits out of the feeder. There was only one option and that was to open the other pasture so they could get the emergency bale, just in case they ran out, which we both didn’t expect to happen. When they are out of food and they see you going for a gate, then it’s all critters on deck and they are ready to go! I had to think this one over for quite a while. I had other approaches to that gate but most of them were not ones that made me comfortable, while they are excited. After much thinking, (if I do this, they will do that), I decided to sneak up on the gate from the other side by rolling under a wide part in the fence. I was able to sneak up and by the time one saw me and got excited I was able to pick up the awkward gate and let them out into this pasture, while holding the gate in a way where it gave me a tool between them and me. They all did just as they should and ran down the alley to the next pasture. One thought he’d challenge the situation. By now I had found a place to put the gate and I just instinctively gave him some very uncomfortable body language and he ran with the others. Success! As happy as they were, I was happier! “There are no small victories, only victories!”

As I have mentioned before, I have been reading the Earth’s Children books, Clan of the Cave bear and the 5 other books after that one. The last year and a half we have been preparing for this family wedding and I found it so ironic that the lead characters in the book were doing the same thing. They were preparing for their Commitment Ceremony. It was so interesting that while this took place in time so very long ago in history, there is evidence that these Commitment Ceremonies really did happen. During my reading the young couple’s preparations culminated into a wonderful ceremony where they committed to each other before the community that supported them. As we prepare for this wedding it occurs to me what an age old cultural practice this is, and still is today. I saw this photo on a fermenting page where people were discussing Mead and it’s history. I found it timely and interesting. Now if only couples really got a lunar cycle of total privacy after their wedding. How nice would that be!